Blaston Show back with a bang

Home/News/Blaston Show back with a bang
Previous

Blaston Show back with a bang 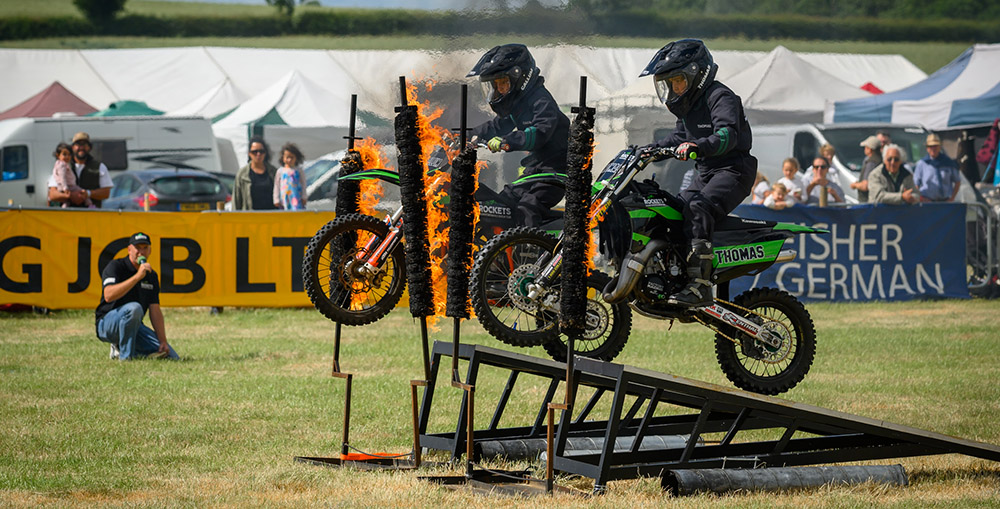 After a two year lull, Blaston Show was back – and it really was bigger and better than ever. Having moved to a new, much larger showground, spectators flocked to the show breaking previous visitor records. Significant funds will have been raised for this year’s nominated charities, the Air Ambulance and Home Start South Leicestershire, as well as other local groups and churches.

Jo Worrall from near Grantham was making a first visit to Blaston Show but said it wouldn’t be her last. “It’s a fabulous day out; a great atmosphere, lots to see and a beautiful setting. The Rockets Childrens Motorcycle Display Team was absolutely brilliant – I couldn’t believe how young some of the riders were!” Ruth Lawrence agreed: “The kids have been up the climbing wall and down the inflatable slide more times than I could count. They got to have a cuddle with some hounds and they loved the cattle and sheep too – especially a really shaggy sheep which was native to the Swiss Alps.”

Sheep entries were at record levels with over 160 pens containing a wide range of breeds. The Overall Supreme Champion prize was awarded to Dovecote Daisy, shown by Joshua Jack from near Milton Keynes. Daisy is a 12-month-old Beltex – a breed introduced to the UK from Belgium in 1989 – and this was her third win to date.

The cattle classes were also very well supported, with all shapes and sizes on show from the little Dexters to huge bulls. Sassy Lass, a Limousin x Blue Heifer shown by David Leedham, was the worthy winner of the Commercial Section Championship before being crowned Supreme Champion.

The most popular equestrian class was undoubtedly the Fancy Dress which this year had a Platinum Jubilee theme. The win went to an elaborate ensemble of the ‘Queen’ in her carriage, patiently carried by her pony. One child was dressed as the Queen when riding, complete with headscarf, wax jacket and green wellies, another was decked out in the Queen’s racing colours.

Moving from four legs to four wheels, competition for the Best Turned Out prizes among the classic car owners was fierce. Robin Rest’s 1968 Austin A35 Van won the ‘Pre 1970’ category. Lovingly restored by a previous owner and with fold down rear seating it is an ideal dual purpose vehicle for work and a family day out.

The Blaston Show Classic Car Run attracted 25 cars and a Bedford RL Green Goddess. The vehicles completed a 29 mile course through the south east Leicestershire countryside before arriving in convoy at the showground for a main ring parade and presentation of the Best Turned Out awards.

Last in to the main arena at the end of an action packed day was a fabulous collection of vintage tractors. Blaston Show boasts one of the largest vintage tractor gatherings in the country.

The general consensus from spectators, tradestand holders and exhibitors was that this year’s show was the best in its 63 year history. Social Media comments include, “Really enjoyed it, brilliantly organised, we will be back next year”; “Honestly, the best Blaston I can remember”; “Excellent day with a great turn out”; and “Absolutely fantastic show, well done to all involved”.

The show remains an eclectic mix of entertainment, truly something for all the family. Save the date for next year: Sunday 25th June.

By Hilary Manners|June 27th, 2022|News|Comments Off on Blaston Show back with a bang